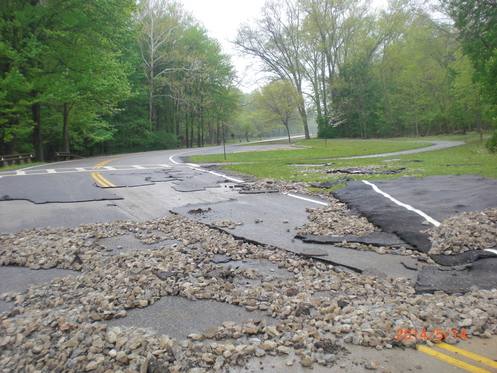 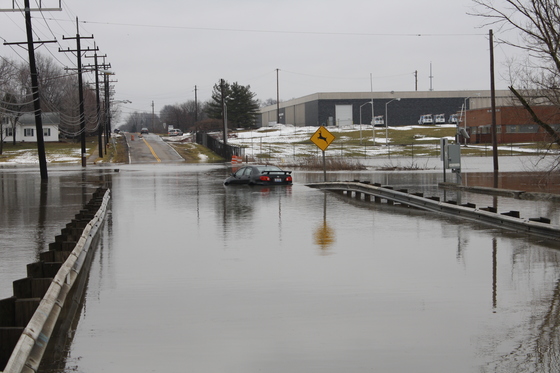 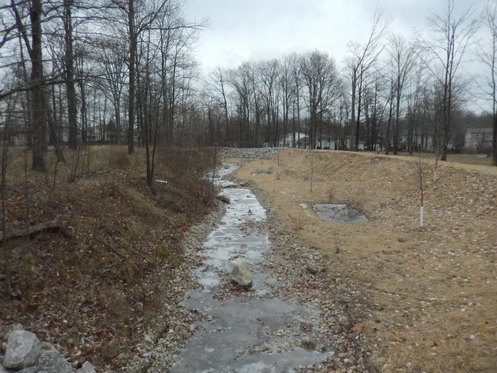 Next Tuesday will mark the 1-year anniversary of the storm that dropped nearly 5-inches of rain over a 6 hour period during the evening of May 12, 2014. Concentrated mostly in southwest Cuyahoga County and Northern Medina County, the storm left in its wake lasting images of flooded roads, parking lots and basements, scoured stream channels and damaged infrastructure.
But how does it stack up against previous floods, and what caused it to be so bad?

How does the May 12, 2014 storm stack up against previous floods?
Since we are looking at this through the lens of watershed management, we will use flow data collected at the United States Geological Service gage located on the Rocky River at Cedar Point Rd. in North Olmsted. This gage has been collecting flow data more or less continuously since 1923. The gage measures the Rocky River’s discharge in cubic feet per second (cfs) – in other words, the volume of water flowing past the gage at a given point in time.

The maximum discharge associated with the May 12 storm was 20,300 cfs. This roughly equates to 14 Olympic-size swimming pools of water flowing past the gage every minute. If that sounds like a lot, that’s because it is. The only higher discharge during the 92 year history of the Rocky River gage was 21,400 cfs recorded on January 22, 1959, during a major regional flood event.
Interestingly, 4 of the 8 highest discharge measurements have occurred in the last 8 years, and 2 of the 3 highest have occurred since 2011! This is consistent with the modeled impacts of climate change in our region that suggest rainfall will be concentrated in less frequent, more intense storms.

What caused it to be so bad?
Three main factors contributed to the flooding being so “bad” as a result of the May 12 storm – rainfall intensity/duration, the inability of the rainwater to soak into the ground and the of functional floodplains.

We already mentioned that nearly 5 inches of rain fell during the evening of May 12, 2014. Looking closer at the rainfall data, we can see how fast the rain was falling – it’s intensity, measured in the number of inches that fall over a given period of time. At its peak intensity, the storm dropped 0.17 inches of rain in just one minute, and 0.40 inches in a 5-minute period. By comparison, average monthly rainfall in northeast Ohio doesn’t top 4 inches for any month of the year.

In addition to the intensity of the rainfall, the worst of the storm was concentrated in the suburban areas of southwest Cuyahoga and northern Medina counties – areas that saw significant growth and land development prior to the implementation of effective requirements for storm water control. So, the runoff generated by most of the impervious surfaces in these areas is conveyed directly to nearby storm sewers and roadside ditches that send the water directly to the nearest creek. In fact, moving water off the landscape as quickly as possible was the philosophy that guided storm water management during much of the 20th century. While this might keep water from pooling up in neighborhoods or parking lots for a day or two following a rainstorm, it unfortunately leads to downstream sewer and stream channel capacity issues.

Finally, the loss of functional floodplains adjacent to our creeks and rivers means that we have lost natural flood storage capacity. This has been caused by the filling and encroachment of floodplains to facilitate development, along with stream channel downcutting that prevents creeks from accessing their floodplains.

What can we do to protect ourselves from future floods?
Flooding will always happen – it is part of the natural way excess water moves through and shapes a watershed. However, there are steps that communities can take to reduce the frequency and severity of flooding impacts:
• Don’t allow building or filling in floodplains (and don’t pay attention just to the FEMA 100 year floodplain boundaries – don’t build in any areas that function as a stream’s floodplain, regardless of their FEMA designation).
• Undertake projects to reclaim floodplains or to reconnect streams to their floodplains wherever possible.
• Follow the storm water management guidelines in the Ohio Rainwater and Land Development Manual – as minimum standards.
• Increase tree canopy coverage in your community -especially along stream corridors and in areas with a high concentration of impervious surfaces.
• Encourage infiltration of rainwater by installing rain gardens or otherwise converting lawn areas to meadows or native plant landscaping.
• Maintain detention basins and other storm water control measures to ensure they function properly during heavy rain events.