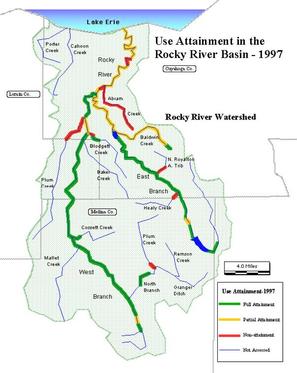 Note: For a larger images of the above maps, visit http://myrockyriver.ning.com/maps.

A recent study conducted by Ohio EPA indicates that all 11.8 miles of the Main Stem of the Rocky River are now in complete attainment of its Warmwater Habitat designated aquatic life use. In other words, the Rocky's Main Stem supports the number and diversity of fish and aquatic macroinvertebrates that you would expect to find in a healthy river in its ecoregion. This is the first time that the Main Stem has met its Clean Water Act goals for biology. The West Branch is also in complete attainment, as well as the entire East Branch, except for a short segment near the Bonnie Park dam in Strongsville.

So what led to this remarkable achievement? A number of factors have contributed to the improved health of the Rocky River since Ohio EPA's last in-depth study in 1997:

Despite this good news, there’s still work to be done, as many of the tributaries continue to struggle to meet their Clean Water Act goals for fish and macroinvertebrate communities, including all or portions of Abram Creek, Baldwin Creek, Blodgett Creek, Cossett Creek, Granger Ditch and both Plum Creeks. Also, bacteria pollution continues to be a problem throughout the watershed.

With the continued assitance of our partner agencies, nonprofit groups, communities and local citizens we can and will restore the entire Rocky River Watershed to full health!