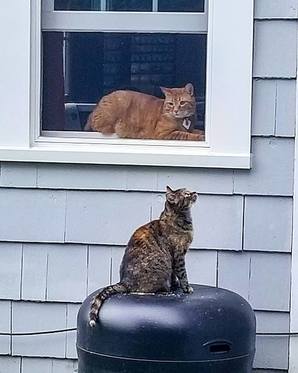 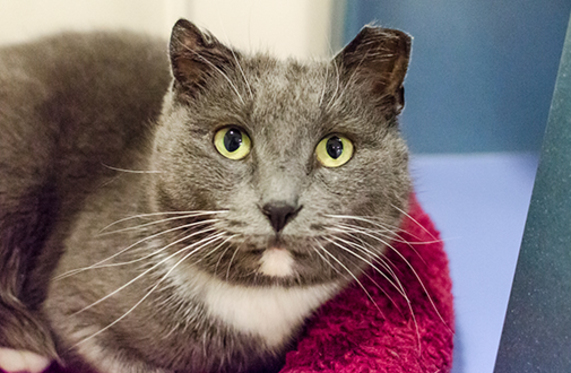 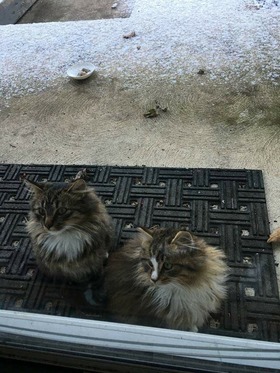 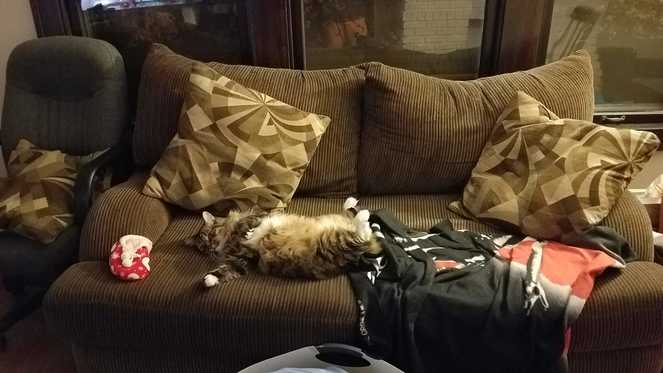 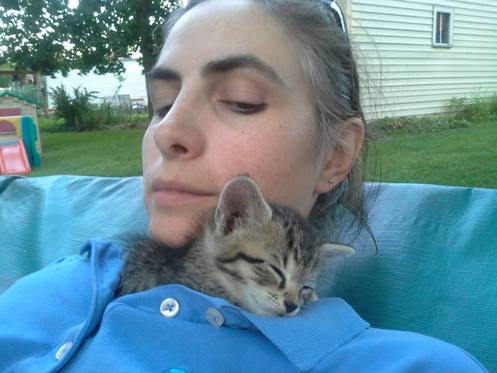 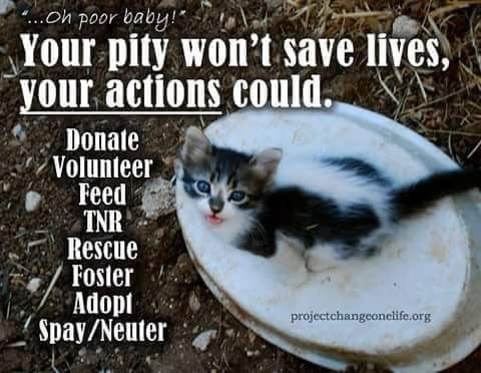 Bird migration time is upon us! One of the many obstacles that migrating and non-migrating bird populations face is predation by an ever increasing cat population. Some of these are protected or struggling bird species whose populations are at risk, such as the bobwhite quail in Florida where cat predation is having a large impact. It has been estimated that cats are responsible for the deaths of approximately 1.3-4 billion birds and 6.3-22.3 billion mammals each year.

Warning, this is going to be a long one.

Here is a little history and some interesting figures to think about. In 1947 the pet cat population was approximately 4 million and as of 2017/2018 it had grown to around 94.6 million! This statistic has remained fairly steady over the last year. Back in the 1940's cats were rarely kept inside and had a job just like other farm animals. They were able to use their natural instincts/behaviors to roam and hunt while at the same time protecting the crop storage areas from small critters such as rats and mice. With the invention of "Kitty Litter" by Ed Lowe in 1947, with a little help from his neighbor Kaye Draper who needed a solution for her indoor cat urine problem, the popularity of keeping cats indoors as companion animals increased. With the constant refining of his products over the years ("Kitty Litter" and "Tidy Cat") and some smart marketing more companies caught on. Companies in the cat business preyed on people's love for their animals and habit of humanizing them. So we began giving our pets the same healthy foods, supplements, health care, and comforts we would give ourselves and children. The cat population soared, out numbering pet dogs by 8.2 million in 2011 at a population of 86.4 million. These figures do not even include the number homeless ones out wandering the streets a.k.a. feral cats. That figure was around 60-100 million in 2012, but that is an almost impossible figure to calculate.

With the popularity of owning cats as pets increasing people often get them as gifts or just don't understand what it takes to have a cat in their home. It is often thought that owning a cat is easier than owning a dog and that they don't need as much space, etc. While that's true in some respects, there are other behavioral and health issues to deal with that are unique to cats. It's for these reasons and others, such as the breakup of a family or moving to a location that does not permit cats, that they are often given to shelters, rescues, rehomed, and unfortunately, often abandoned to fend for themselves. This abandonment is what has led to high populations of feral cats and this leads to a whole host of issues. There are also many kind hearted people out there trying to do the right thing who offer food and shelter to these feral cats, but while that helps to save lives it also contributes to the problem at the same time. So here in lies the conflict, how do we live in harmony with these feral felines?

In all honesty, I don't believe there is any one good answer. It is my opinion, that just like with stormwater best management practices, it takes a combination of methods to have the most impact. Here are some things you can do to help and why it's important.

First and foremost: keep your kitties inside, get them spayed or neutered, and keep them up to date on vaccinations. The outdoors, while one may think it's the best place for them to exercise their basic instincts, is a very dangerous place. By doing these things you are keeping them and yourselves safe from parasites (fleas, worms, ticks, etc.) and minimizing their risk of contracting diseases (FIV, FeLV, FP/distemper, rabies, etc.). Spaying and neutering helps to reduce the risk of mammary and testicular cancer, pyometra, prostate disease, STD's, spraying, and unwanted litters of kittens that contribute to the overpopulation problem. The outdoors also poses the risk of injury or death from cat or dog fights, cars, mistreatment by humans, predators, malnutrition and various other factors. Someone may even take your cat thinking that it's a stray. Make sure they have ID tags and/or are microchipped. If you want to give them a safe outdoor experience there are screened-in enclosures that can be set up in your yard. Ways for them to get exercise and stay entertained indoors is to, as Jackson Galaxy says, "catify" your house or a dedicated area for them. This also remedies some of their negative behaviors.

Second: try to keep feral cats out of your yard. Some of the problems I have had personal experience with are feral cats or people's indoor/outdoor cats using potted plants or flower beds as their restroom and tearing up the plants. The more concerning problem I have had to deal with are these cats wandering near the house or on the porch leaving their scent behind, especially by spraying. This in turn causes indoor cats to become territorial of their space and they get very agitated if they saw them through the window and with their super sensitive noses could smell the scent of the other cats. They would then try to cover up the invader's scent with their own to reclaim their territory by spraying inside the house by the windows. This was done by both my males and females who were all fixed. If you have ever had to deal with cat urine in carpets, furniture, etc. and especially from spraying you know how nearly impossible it is to get rid of the smell. A friend of mine recently had a costly vet bill because his cat snuck outside and was attacked by a feral resulting in a very infected bite wound. There are various techniques you can use to help keep outdoor cats away from your house such as noise makers, motion activated sprinklers and noise makers, squirt bottles, tall smooth fencing, etc.

Third: do not keep bird feeders or bird baths in your yard. You are serving up free meals for cats and other nuisance species. Instead plant native trees or shrubs that produce various types of berries and other resources for birds. These also provide shelter, hiding places, and places for birds and other mammals to escape to. If you want to have a bird feeder and/or bath you should also provide native trees or shrubs as an escape and keep feeders and baths at least 10-feet away from areas that cats can use as hiding places and it gives birds and other mammals a clear view to spot stalking predators. The yard or area should also be fenced in as well as using other techniques previously mentioned.

Fourth: adopt don't shop. Prior to adopting any pet do your research and make sure that particular type of pet is right for you and the environment you live in. Most rescues will often try to find the best match for you and that animal. Make sure that you can financially handle taking care of a pet. A "free" pet is never free. There are many expenses that come with having a pet. For example, it cost me over $300 to have my feral kitten fully vaccinated and fixed 2 years ago. Not to mention flea treatment and microchipping. My sister scooped up two small kittens she found at the back of a parking lot and ended up spending over $2000 on medical treatment for one of them when he developed recurring seizures. There are many rescues, shelters, and caring groups of people out there always trying to find homes for cats of all ages. If you get a cat from a rescue or shelter they are often vetted and fixed prior to adoption. This will save you money up right up front. Unlike my floofy feral, my newest kitten that I just adopted from a rescue only cost me $90 and all he still needed was his last vaccination and I chose to get him microchipped. Much cheaper than my "free" cat right? Remember a pet is for life! When you agree to adopt a pet you are making a commitment to give that animal quality care for the rest of its life. They are not disposable pieces of property that you can just throw out or toss aside when you become frustrated or bored with them. Many behavioral issues can be resolved with medical attention, environmental adjustments, training, or just taking the time to play with them. By the way, my sister's sick kitten is now very healthy and living a wonderful indoor life with his brother and 2 older kitty siblings.

Fifth: trap, neuter, release/relocate (TNR) programs. This is a controversial topic as it only makes a very tiny dent in an ever growing population and the problem of the cat being there in the first place has not been resolved. However, every little bit helps I think. These programs trap feral or community cats and have them fixed at a discounted rate and then released to the same area or relocated to a different one. This helps to stop the reproduction cycle for that cat or group of cats. While they are being fixed the vet will also cut the very tip of the ear off so that if they are spotted or caught again they can be identified as already being sterile. This is often thought to be a more humane method than trapping and euthanizing possibly healthy cats or later being euthanized in a shelter for various reasons. Plus that same area will likely be repopulated by another group of feral cats to take over a now open territory. The argument can go both ways as to what method is more humane as feral cats live dangerous lives outside and often die young from predation, mistreatment, malnutrition, starvation, injury, disease, or any combination of these while some also live long relatively healthy lives.

Sixth: another controversial topic. Many well intentioned and very caring people leave out food, water, and build really nice shelters for these feral cats, especially in the winter. Sometimes they even get them medical care if they can. Some take them in and some try very very hard to find homes or rescues for them. While this helps to save lives it also contributes to the overall problem and causes issues for some of their neighbors. For example, the feral cat that attacked and harasses my friend's cat is fed by a neighbor down the street. I honestly cannot say that I wouldn't do the same if I had a sick or homeless cat in my yard and I was unable to help it in any other way than to provide food and outdoor shelter. On a personal note, as a conservationist, animal lover, and cat lover this has been one of the most difficult and eye-opening blogs I've ever written thus far. My own personal beliefs, knowledge, and experience in the veterinary industry are fighting each other.

And finally, seventh: support your local shelters and rescue groups. Donate money, supplies, or volunteer. They are often full and need all the support they can get as they spend thousands of dollars on supplies and medical care for homeless animals.

PLEASE NOTE: There is a lot of misinformation out there and there are some shelters and rescues that are not what they say they are. Do your research first!

Remember everything little thing we do has big impacts on something else.

Friends Forever: What Are the Real Costs of a Free Pet?

Statista - Number of cats in the U.S.