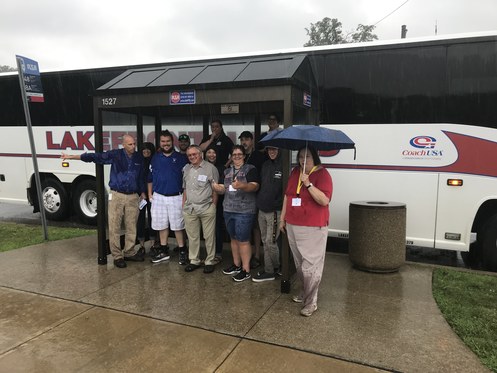 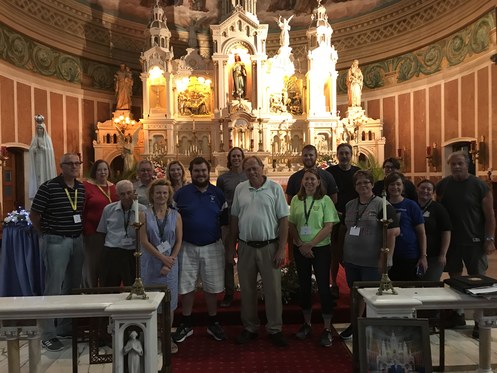 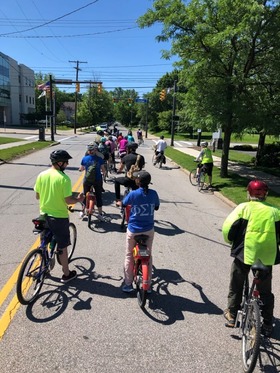 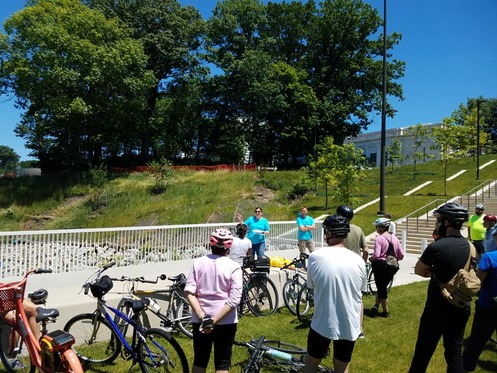 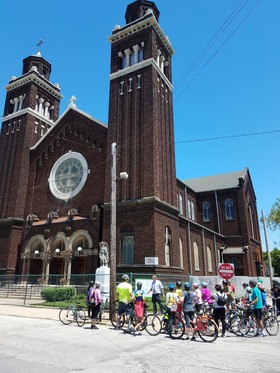 Cuyahoga Soil & Water Conservation District's has recently led two different green infrastructure tours. The first tour was by bicycle on 6/21/2019 as part of the Cuyahoga 50 celebration. The second tour was by bus on 7/30/2019 as part of the Ohio Federation of Soil and Water Conservation Districts 2019 Summer Supervisor School.

The USEPA defines green infrastructure as "a cost-effective, resilient approach to managing wet weather impacts that provides many community benefits. Green infrastructure reduces and treats stormwater at its source while delivering environmental, social, and economic benefits."

The bike tour covered approximately thirteen miles with ten stops. Tour participants had the opportunity to learn about pervious pavers, bio-retention, green roofs, soil remediation, stream restoration, infiltration, and more. The bus tour lasted approximately six hours with five stops. Participants in bus tour learned about rainwater harvesting, reducing impervious cover, regional scale bio-retention, green infrastructure incentive programs, and the importance of community involvement. It was explained to both groups that while we were only stopping at select sites during the tour there were many others along the way thus creating an ever expanding patchwork of water quality treatment facilities city-wide.

The bike tour consisted mainly of residents and cycling enthusiasts that did not have a deep understanding of either stormwater management or green infrastructure. For them the tour was eye opening to say the least. They had an opportunity to explore Cleveland's Mid-Town at ground level and discover the hidden world of stormwater infrastructure.

The bus tour on the other hand included supervisors and staff from other soil and water conservation districts; both urban and rural districts were represented. Since many of these tour participants were familiar with the fundamentals of green infrastructure we able to take a deeper dive into some ancillary considerations. These included; funding sources, design challenges, community involvement, construction challenges, maintenance costs and challenges, effectiveness, and return on investment.

One very special stop that was included on both tours was St. Casimir's church in Cleveland's St.Clair-Superior neighborhood. The historic church was built in 1918 by Polish immigrants. The church was closed in 2009. Parishioners held weekly vigils and on March 7, 2012 a decree from the Vatican ordered the re-opening of the church. John Niedzialek, a parishioner and long-time NRCS employee, played a key role in the reopening of the church and has since been one of its most vocal boosters. Coordinating the installation of green infrastructure around the church in the form of pervious pavers, rain barrels, an exfiltration trench, and a bio-retention has been one of many of his contributions. It has saved the parish money on utility bills and also helped turn the eyes of the parish toward the future of environmental sustainability.

To fill the space between tour stops and provide context to the surroundings we included some nuggets about Cleveland history and the background of the neighborhoods we were in. The goal being to showcase the efforts being made by both public and private entities to improve water quality while demonstrating the vibrancy of Cleveland's neighborhoods and cultures.

Overall feedback from the tour participants was positive. There were some lessons learned that we hope to incorporate into future tours. After all, it's great when you get to brag about the work you are passionate about and the City you call home.