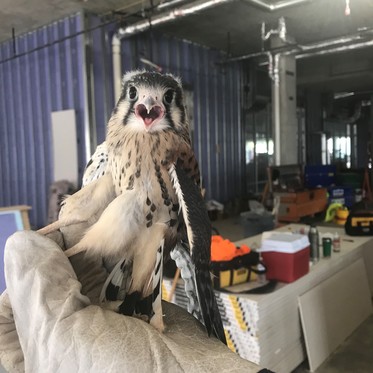 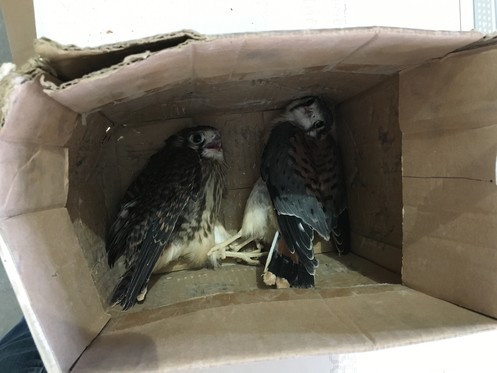 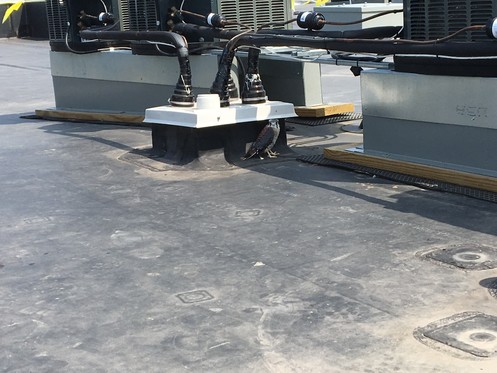 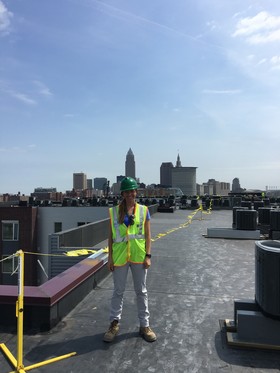 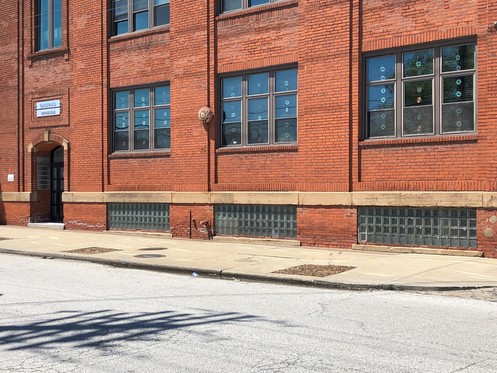 Last June I received a call from one of my site contacts, Pete Daugherty with Snavely Group, who was concerned about some young falcons flying into his construction site. The young birds were American Kestrels. The American Kestrel is the smallest falcon found in eastern north America weighing only 4.1 oz. with a wingspan of 22 inches. They have striking head patterns and a rufous back and tail. These birds are often seen on roadside signs or fenceposts. They usually nest in tree cavities, bird houses, or crevices in building – which is exactly where these young birds lived, a small opening between the Seymour and Forest City Bank buildings on Detroit Ave.

Pete’s site was on the northern corner of W. 25th & Detroit, the new Quarter Apartments. As part of my job, I conducted monthly inspections to ensure the on-site sediment and erosion controls were installed and properly functioning. During these inspections, Pete and I would chat about our common interest in birds. I mentioned I volunteered with Cleveland Lights Out. As a volunteer, I saw firsthand the Lake Erie Nature & Science Center rehab and release injured birds. So, when Pete called me about the young birds in his construction site, I knew who to call.

We were told that these birds were fledging’s meaning they recently left the nest for the first time. They did not show any signs of injury or any warning signs that they needed to be brought into the center. So, we were instructed to bring the birds to the safest spot on the busy construction site and let them make their own way back to the nest. In collaboration with the nature center employee, we determined the safest release area was the rooftop. Upon climbing to the top, we quickly spotted an adult kestrel – likely the parent. We released the birds, afterwards Pete had to repeat this process a couple times as the young birds continued to fly into his site. Throughout the summer I would glance up at the hole in the building, every once in awhile I would see a small bird peeking through.

The construction phase of The Quarter finished, but the area is still undergoing renovations. I was excited when I saw an article posted by WKYC Channel 3 this month that starred the very same nest from last summer. This family of kestrels are lucky to have the Snavely Group on their side! It was reported that the adult kestrels were defending their nest because inside were five eggs that later hatched. The project manager decided to postpone building renovations in the nest area until the birds “naturally run their course.” A live camera is set up inside the nest if you want to check it out!

This is an uncommon example of wildlife living in harmony within urban development. If you are inspired by this story and want to do your part to ensure our flying friends are safe in our highly developed areas, please volunteer with Cleveland Lights Out or make your own windows bird friendly by reading my previous blog. If you find injured or seemingly abandoned wildlife please call the appropriate offices to know how to appropriately proceed: Ohio Division of Wildlife or Lake Erie Nature & Science Center are good starts. Shout out to the Snavely Group for their continued respect for this kestrel family and to WKYC Channel 3 for their coverage of this great story!